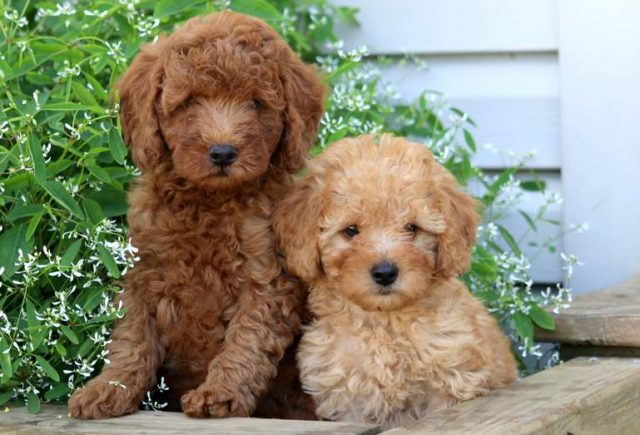 The Poodle has such a long history in France that some Americans still refer to it as the French Poodle. This is the national dog of France, and both Standard and Miniature Poodles can be traced back to the 15th century. Miniature Poodle puppies were especially popular as laptops to keep the nobility warm in drafty castles. Famously, they were called “sleeve dogs” in Renaissance France because they traveled with their owners perched in the large sleeves popular at the time.

While the Standard Poodle was bred for sporting traits, the Miniature Poodle has been bred for centuries as a gentle companion dog.

This dog was bred to be more of a lap dog. The Mini Poodle is lively, playful, and loyal to its master. Its hypoallergenic fur, and loving temperament makes it a good choice for many families.

The Miniature Poodle was recognized with the AKC in 1887 and grouped as Non-Sporting.

The Mini Poodle is friendly, likes people, and is good with strangers. Most do well with other dogs and children. This puppy loves to cuddle with his owners which make them an excellent lap dog.

This pup is usually even-tempered and loyal, and bonds quickly with family members. These are highly intelligent dogs that is easily trainable. However, they need an outdoor walk every day to keep him calm and centered. The Mini Poodle is not suited to be an outdoor dog.

This breed has a long history as a circus dog, so this dog is a favorite choice for owners who want an athletic puppy who is open to learning tricks. Some Mini Poodles are territorial and highly excitable, but patient and consistent training can usually modify this behavior.

The average life span of the Mini Poodle is 13 – 15 years. While most Mini Poodles are hearty and healthy, you should be aware of possible health concerns including:

Mini Poodle’s eyes and ears can collect crust and discharge that can discolor their coat and cause infections, so best to gently wipe out ears daily. Use a clean cloth to wipe around eyes daily and remove any crust or discharge.

All breeds of dogs should be brought in for regular vet checkups. It’s essential for every type of dog to stay current on all shots and vaccinations.

The Mini Poodle has a hypoallergenic coat which is excellent for allergy sufferers. When a Poodle sheds, the Poodle’s hair does not fall but instead gets trapped in the adjoining hair, causing matting. Matting eventually causes skin irritation. If your Poodle has a long coat, you should brush out your Poodle every day.

Many Mini Poodle owners opt for a short cut or trim to minimize grooming needs. When a shorter cut, you can reduce brush outs to a few times a week and get the coat trimmed up every 4-6 weeks.