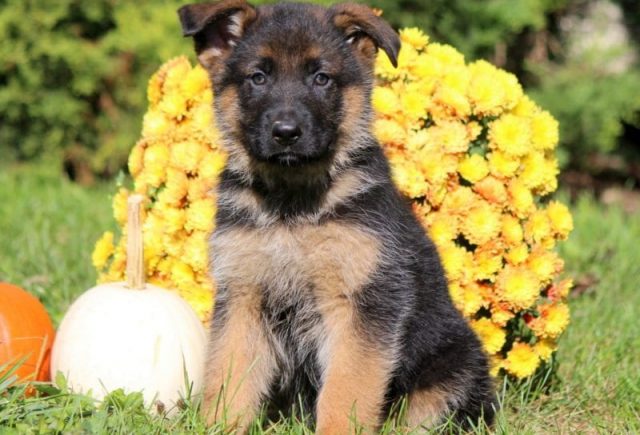 German Shepherd puppies are often listed as one of the most popular puppy breeds in the United States. This breed is large, agile, and strong. Because of its size, loyalty, and intelligence, it is often the breed of choice for police, military, and security units. However, this courageous and dependable dog is also an exceptionally loyal pet that is protective of its family’s children and adults.

While the German Shepherd has been around for a while, this breed’s traits weren’t formally standardized until the 1890’s. The German Shepherd was then recognized as a distinct breed developed for working, herding and military work.

This breed was recognized by the AKC in 1908 and was grouped as Herding.

This breed is known for being large, fearless, and alert, making them an extraordinary watch and guard dog. Because of protective instincts, this puppy can be territorial and aggressive to people and animals that they perceive as threats to their masters. This means that German Shepherds must be trained and socialized in ways that help them curb or control protective instincts.

German Shepherds are usually relaxed and playful with his family but this active, athletic dog needs lots of vigorous exercise to keep him calm and centered. This breed can also be aloof among other dogs.

The life expectancy for the average German Shepherd is 7-10 years. This breed is hearty and vigorous that does well in colder climates and enjoys the winter weather. This dog needs to be watched in hot weather to prevent overheating.

While this breed is generally healthy, the German Shepherd’s master should be aware of these common health concerns:

To keep your German Shepherd puppy healthy, provide him with daily, vigorous exercise. Because this breed can have joint issues, keep your Shepherd at a healthy weight. Minimize ear infections by cleaning his ears weekly. Take your dog in for regular vet checkups. With all breeds, it’s important to stay current on all shots and vaccinations.

The hearty German Shepherd was bred for outdoor work in cold climates. That’s why this dog has a hard, straight double coat which is medium in length. This puppy is a heavy shedder and typically sheds more during seasonal changes in spring and fall.

The hair around their neck is generally thicker. When you get a German Shepherd puppy, you should plan for brushing the dog out a few times each week to keep shedding under control. During a seasonal change, you may want to increase brush outs to several times a week, or even daily to avoid having your house filled with short, dark hairs.

While this breed needs a lot of brushing to keep shedding under control, he does not need baths. In fact, bathing is detrimental to this breed and could cause the depletion of natural oils stored in the fur.