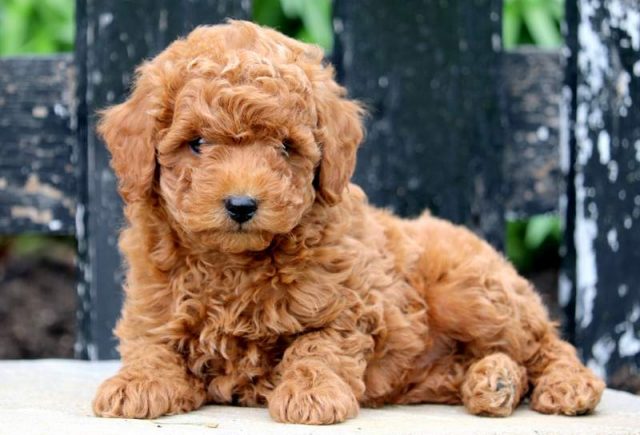 The Bichpoo puppy breed is a cross between a Poodle and a Bichon Frise. This fluffy bundle of joy is playful, friendly, and cuddly. Sometimes called a Poochon, these pups first appeared in Australia in the 1990’s. Like many designer breeds, this one was developed to provide a small cuddly pup that did not trigger allergies.

The result is a loving house dog that does well with children and other pets. While this attractive breed has grown in popularity, it is important to make sure your pup is a first generation hybrid, bred from a Poodle and Bichon Frise. Second and third generation hybrids are known to have health problems.


That’s why the American Canine Hybrid Club (ACHC) will only acknowledge a Bichpoo if they are a first-generation cross breed between a purebred Toy or Miniature Poodle and a purebred Bichon Frise.

If you want to buy a Bichpoo puppy, it’s smart to do a little research first. They combine playfulness with the appealing cuddliness of lap dogs. This keen hybrid is a fast learner and is usually fairly easy to train. They also enjoy learning tricks and like to perform.

These dogs can get lonely if left alone too long. Conversely, too much attention may make them demanding or spoiled. Clear leadership, combined with gentle but firm discipline, will help your pup understand his place in the “pack,” and can help keep your pup calm and centered.

These fluffy fellows do well with children and other pets. But their small size means they are a bit fragile, so they may not be a good fit for families with very small children.

Bichpoos are constantly alert and will bark to let you know that someone is at the door. They can make excellent watchdogs. However, because they are prone to excessive barking, training and socialization are important early on.

If you’re considering adopting a Bichpoo puppy, make sure you understand this breed’s health considerations. The average lifespan is 12-14 years. Blocked tear ducts are common, so watch for issues and make sure to gently wipe eyes each day with a clean, damp cloth.

Because this is a relatively new breed, the data on health issues is insufficient. However, some health concerns to watch for are:

Your Bichpoo should be the offspring of a purebred Poodle and Bichon Frise. Second or third generation Bichpoos are not recommended, because they are significantly more likely to experience serious health issues.

Daily outdoor exercise is important to keep these energetic dogs healthy and happy. With all dogs, stay current on shots and vaccines and schedule regular veterinary checkups.

The coat should be fluffy and dense. The coarser hair of the Poodle is preferred since it reduces the likelihood of allergic reactions.

Daily brushing is recommended to reduce matting and tangling. Many owners prefer clipping every 4-6 weeks. Wipe eyes daily to reduce chance of infections. Bathe only when necessary. Dog Breeds Similar to the Bichpoo