Looking for a Shih Tzu puppy for sale? These dogs are truly an ancient breed, with a history going back more than 1000 years. Dubbed the “lion dogs” by monks in Tibet, these pups were eventually given as gifts to Chinese emperors. Chinese nobility prized these sweet pets for their appearance, their affection, and the warmth they provided in cold palaces. They also gained fame as tiny palace guards, skilled at barking at people who listened at palace doors. Modern Shih Tzus are still alert watchdogs and ferocious barkers.

Eventually, these imperial canines were gifted to Dutch and English traders and made their way to Europe where they were embraced by all classes. The breed arrived in the U.S. in 1938, and became widely popular in the 1960’s. The Shih Tzu breed was first registered by the AKC in 1969 and grouped as Toy.

If you want to buy a Shih Tzu puppy, it’s smart to do a little research first. These “lion dogs” are gentle, loyal, and friendly. They are cuddly lap dogs that crave affection and only need moderate outdoor exercise. This is a dog that prefers lounging to romping.

These puppies love children and make good family dogs. They are confident, sometimes arrogant, and often stubborn, so training can be a bit of a challenge. However, these pups love the attention of training, so be patient and consistent.

Alert and territorial, Shih Tzus are quick to bark when anyone approaches. With over 1000 years of watchdog training, it’s difficult to curb barking with this breed.

If you’re considering adopting a Shih Tzu puppy, make sure you understand this breed’s health considerations. Average life expectancy is between 12-15 years. This is generally a pretty healthy breed, but they may be prone to breathing problems due to their snub nose. Other health concerns to watch for are:

With all breeds, stay up to date on shots and vaccinations. And schedule regular checkups with your veterinarian.

These puppies are famous for their luxurious, long, flowing double coat.

This long coat is fast-growing hair that reaches the floor and requires regular grooming. These pups shed very little and are considered to be hypoallergenic.

To keep your puppy looking good, daily brushing is required. Some clip the coat short to simplify grooming. For conformation, when showing the coat, it must be left in its natural state, though trimming for neatness around the feet is allowed. It is also important to keep hair out of the eyes and keep their ears clean because these areas are very sensitive. 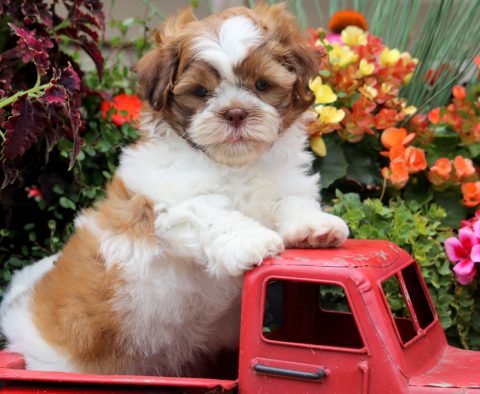