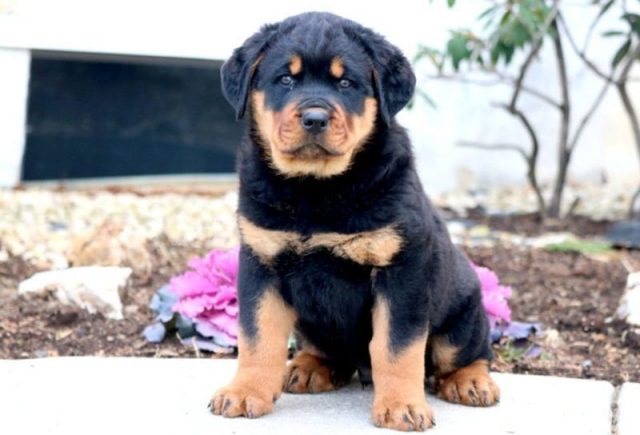 The Rottweiler puppies are a breed of domestic dog, regarded as medium-to-large or large. The dogs were known in German as Rottweiler Metzgerhund, which means “Rottweil butchers dogs”, because their main use was to pull carts of meat to the market and herd livestock.

Rottweiler’s are still used to herd livestock in different parts of the world, but they are now used more as search and rescue dogs, guard dogs, and as police dogs.

The Rottweiler breed nearly became extinct in the 1800s.

The Rottweiler puppy is a good-natured, not easily upset, very devoted, obedient, biddable and eager to work. They reacts with great alertness to their surroundings yet staying even-tempered.

While even-tempered, they make much use of their ability to intimidate. According to the AKC, “Rottweilers have a natural gathering style with a strong desire to control. They generally show a loose eye and have a great amount of force while working well off the stock.”

The Rottweiler are generally a healthy breed, with a life expectancy is between 8-10 years. Like many large breeds, they can experience joint issues later in life. Keeping your dog at a trim weight will minimize the risk of problems with joints. This breed also requires daily outdoor exercise and plenty of indoor space to stretch and roam.

Rotties can become overheated or suffer from heat strokes, so monitor them carefully in the heat and make sure they have access to fresh water. Don’t’ give your pup ice cold water in the heat, since this breed is susceptible to bloat.

This breed may occasionally experience the following health issues;

Keep eyes and ears clean by gentle wiping as needed. All breeds of dogs should be brought in for regular vet checkups. It’s important for every type of dog to stay current on all shots and vaccinations.

The Rottweiler breeds have a short double coat that’s coarse and straight. The outer coat is medium in length, shorter on the head, ears, and legs; the undercoat is found mainly on the neck and thighs.

The Rottweiler is always black with markings that are rust to mahogany in color. The markings appear over the eyes, on the cheeks, on each side of the muzzle, on the chest and legs, and beneath the tail.

Brush a Rottweiler’s coat weekly to remove dead hair and distribute skin oils. They shed twice a year, and you’ll want to brush more frequently during that time. Bathe as needed. 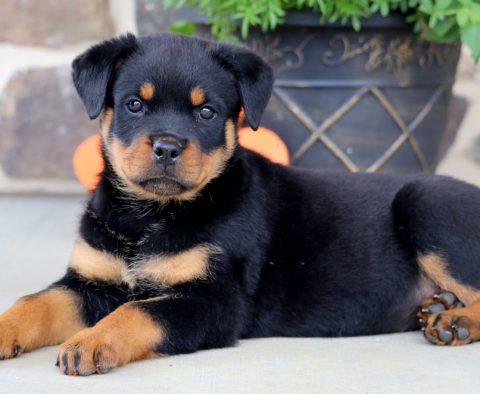 Dog Breeds Similar to the Rottweiler