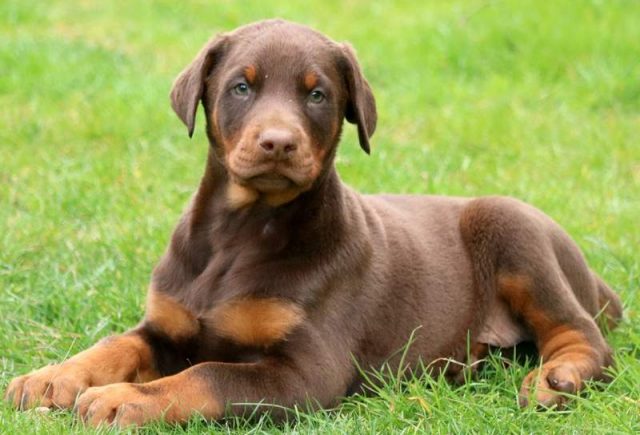 Looking for Doberman Pinscher puppies for sale? This handsome guardian is a favorite in North America and Europe. The breed’s lore says that this breed was first developed by German tax collectors in the 1870’s to protect them on their rounds. However, the early breed was larger and less refined than today’s breed.

Around the turn of the 20th century, many new breeds and bloodlines were introduced, including the Manchester Terrier, German Shepherd, Rottweiler, and Greyhound. These breeds made the dog larger, sleeker, and more athletic.

This improved breed quickly became known as an intelligent, loyal, and sometimes fierce dog. In the 20th and 21st centuries, they have been popular choices for police, military, and K-9 duties. In World War II, the U.S. Military formally recruited Dobermans to guard camps, deliver messages, sniff out landmines, and conduct search and rescue missions.

Today, they are still active as working dogs for police and military, but they are also popular choices for home guard dogs and companions and serve as therapy and service dogs.

The Doberman Pinscher was first registered by the AKC in 1908 and was grouped as Working.

If you want to buy a Doberman Pinscher puppy, it’s smart to do a little research first. This is an alert and fearless breed. They are also athletic and energetic. They need lots of daily, outdoor exercise to stay calm and centered.

Pinschers are attached to their owner and like to stay close. They are loyal to a fault, but they are not a snuggling breed. Instead, they prefer to lie in a stately pose at your feet.

Dobies are loyal and protective dogs and are excellent watchdogs. And this is a dog that takes their guard job seriously. Dobermans can attack when they feel they or their family members are being attacked, so careful socialization and training are needed to control this instinct. They are recommended for experienced dog handlers and are not a good choice for a first dog.

These pups love children, but they may be too quick and powerful for very small children. They can live with other dogs and pets if they are well socialized as puppies. They may be especially territorial with another dog in the home if they are the same gender.

If you’re considering adopting a Doberman Pinscher puppy, make sure you understand this breed’s special health considerations. Their average life expectancy is 10-13 years. This is a healthy breed overall, but some health concerns to monitor are:

Obesity can be an issue with Dobies, so watch your dog’s diet and weight. Provide plenty of outdoor exercise. With every breed, it’s important to keep up to date on shots and vaccinations. Schedule regular veterinarian checkups for your pup.

The Doberman Pinscher coat is short, dense, and smooth.

They are moderate shedders and should be brushed 1-2 times a week, wiping down the coat to reduce odor, and only bathe when necessary.

Keep inside of the ears clean by wiping with a clean, damp cloth 1-2 times a week.