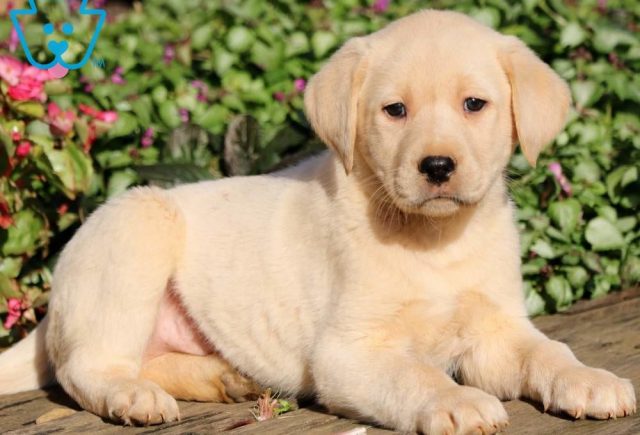 The Labrador Retriever is sweet, gentle and loving. No wonder it’s one of America’s most popular dogs. This puppy is prized as an intelligent and gentle family pet. The Labrador’s social and obedient nature, combined with the cleverness inherited from their hunting lineage, makes this breed a favorite choice as a therapy or assistance dog.

The Yellow Labrador Retriever has a long and storied history in North America. Their ancestors were first bred as a fishing dog on the chilly, northern island of Newfoundland, now part of the province of Newfoundland and Labrador, Canada. The Labrador was bred from the St. John’s water dog, a large and hearty fishing dog bred by the settlers of Newfoundland as far back as the 16th century.

In the 19th century, this breed transitioned from a fishing dog into a specialized gun dog used for hunting and retrieving game.

The Lab was first recognized by the AKC in 1917 and grouped as Sporting.

The Yellow Labrador Retriever is well-known for its social and gentle nature. This confident yet tender pup loves being around people and is comfortable around strangers. The Yellow Lab is famously non-aggressive and exceedingly friendly. The Yellow Labrador does well with children. These dogs are usually tolerant of climbing and tugging by small children and love to be spoiled by their family.

However, because the Lab was bred as a hunting dog, this lovable giant will need lots of vigorous, outdoor exercise to keep him calm and centered. The Yellow Labs is usually a big fan of fetching and chasing games, and he likes a good romp in the yard with their family. Yellow Labradors enjoy walks with their master, and are also good swimmers that enjoy lakes, rivers, pools, and the beach.

The average life span for a Yellow Lab is between 10 – 12 years. While this breed is generally healthy, the Yellow Labrador Retriever’s master should be aware that hip dysplasia is a common problem for older or overweight Labradors. Owners should carefully monitor weight to keep this dog healthier longer. Other health issues to watch for are:

Because this breed can have joint issues, keep your Labrador at a healthy weight. Obesity is a common issue with Labs, so it’s especially important to watch your dog’s weight and his diet. To keep your Yellow Lab puppy healthy, provide him with daily, vigorous exercise. Take your dog in for regular vet checkups. With all breeds, it’s important to stay current on all shots and vaccinations.

The Lab’s coat should be short and dense, but not wiry. This hunting breed’s coat is described as water-resistant or water-repellent. The Lab has a slightly dry, oily coat that keeps water off the skin and keeps the Lab warmer in cold water and cold weather.

The Labrador’s grooming routine is relatively easy. The Yellow Lab’s coat should be brushed with a firm bristle brush 2 – 3 times a month to minimize shedding. This dog is an average shedder and its water-proof coat does not need frequent bathing.