Looking for Silver Labrador Retriever puppies for sale? These friendly, handsome dogs are gaining in popularity, but some controversy exists around the origin of their unusual coloring. While some people insist that these beautiful pups have Weimaraner blood, repeated DNA tests show that these pups are pure Labrador.

This breed originated on the Canadian island of Newfoundland. The stock has been traced back to a fishing dog known as the St. John’s Water Dog. In the 19th century, this strain was developed as a working companion for hunting and retrieving. While most early Labs were black or yellow, some recessive genes produce unusual colors like silver, chocolate, or even white.

Until recently, unusual colors were considered outside of breed standards, and breeders did not strive for silver (or chocolate or white) lines. However, Americans love all shades of this pup and have embraced Labs born with striking or unusual colors. Consequently, many dog lovers intentionally produce Silver Labs, making the variation more common.

Labrador Retrievers were first recognized by the AKC as far back as 1917 and grouped as Sporting. However, the American Kennel Club considers silver outside the breed standards and will not register this color.

If you want to adopt a Silver Lab puppy, you should start by understanding the personality of the breed. They are famously pleasant, non-aggressive, intelligent, and friendly. These large, patient dogs are usually tolerant of the horseplay of small children and like to be spoiled. They love children and make wonderful family pets.

Like many hunting breeds, Labradors have high energy levels and need regular outdoor exercise to stay healthy, calm, and centered. Since they were bred to retrieve game, including waterfowl, they are strong swimmers and are eager to jump into lakes, pools, and even the ocean.

Want to find a Silver Labrador puppy for your home? Make sure you know the pup’s health requirements. The average life span is between 9-11 years. While they are considered to be one of the healthiest breeds, Hip Dysplasia is a common problem for older or overweight dogs. Owners should carefully monitor weight to keep this dog healthier longer. Other health issues to watch for are:

Take them in for regular vet checkups. With all breeds, it’s essential to stay current on all shots and vaccinations.

The coat should be short and dense, but not wiry. This hunting breed has a water-resistant or water-repellent coat that is slightly dry and oily. Unlike many short-haired breeds, Labs are outdoor dogs. They are usually able to keep warm in the winter and cool in the summer.

The short coat is relatively low-maintenance. Brush with a firm bristle brush 2-3 times a month to minimize shedding. They are average shedders, and their water-proof coat does not need frequent bathing. 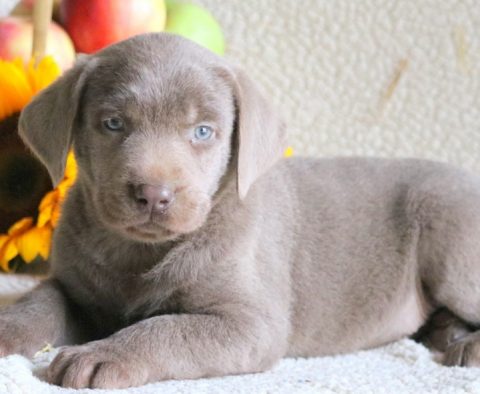