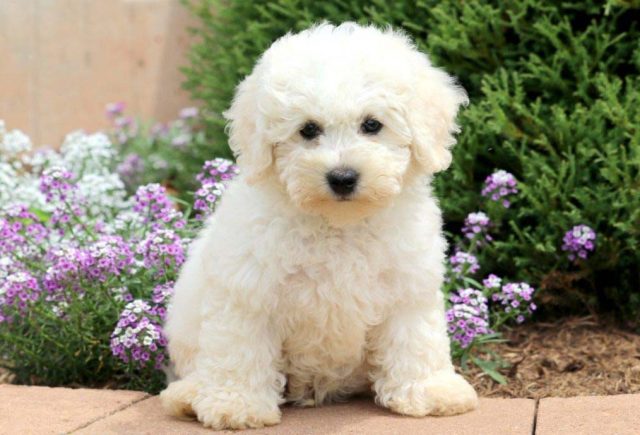 If you’re looking for a Bichon Frise puppy for sale, you’ll be impressed with this dog’s pedigree. They are among the group of little white dogs that have been treasured by aristocrats for hundreds of years. For millennia, these prized pups of royals were used for bartering with sailors throughout Italy, Malta, and The Canary Islands. This bartering was probably one of the ways these handsome dogs made their way to France and Spain.

History shows that European nobles began owning Bichon Frise sometime during the 13th century. During the Renaissance, affluent merchants also began to covet the prestigious breed. Artists started painting aristocrats and wealthy merchants with their pups as early as the 1500’s.

By the 1800’s, the Bichon Frise was no longer coveted by royalty but had found a home among street performers, and in circuses and fairs throughout Europe. After World War I, many American soldiers brought puppies back as pets, and this breed started appearing in America.

It wasn’t until 1933 that a Frenchwoman, Madam Abadie of Steren Vor Kennels, recorded breed standards for the Bichon Frise. In 1943, they become recognized by the French Kennel Club.

In the 1950′s, a group of Americans began formally promoting the Bichon Frise and started breeding pups to meet the French breed standards. These dogs were recognized by the American Kennel Club in 1973.

Average Based on 11 Reviews

If you are considering adopting a Bichon Frise puppy, make sure you understand this dog’s temperament. This small, charming dog has relied on its winning personality to make a place for itself among royalty and circuses alike. They are a playful breed that loved attention, and they are very loyal to their owners.

The Bichon Frise is also energetic. While this dog makes a wonderful lap dog, he also needs a moderate amount of daily exercise and romping to help him stay calm and centered. This is an indoor dog that is good with children and ideal for apartment dwellers.

This alert and curious puppy is also a good watchdog but lacks the size and temperament to be a capable guard dog. They are generally confident and friendly with strangers.

If you think you may want to buy a Bichon Frise puppy, take some time to learn about the health of the breed. The average life expectancy is 12 – 14 years. This breed has some health issues to watch for which can include:

Some pups may be prone to mild eye or ear issues. Gentle daily wiping around eyes and in ears will minimize the risk of infections. It’s important to give your canine moderate daily exercise. All breeds should have regular vet checkups and stay current on all shots and vaccinations.

The double-coat has an undercoat is soft and dense, and the outer coat is coarse. This combination creates a soft but substantial texture. The coat stands away from the body, which gives it a puffy appearance.

Bichons do not shed, which makes them a good choice for allergy sufferers. However, this pup’s curly coat grows continuously, so dead hair must be removed daily to prevent matting. It’s essential to brush or comb the coat every day. If your pup develops felt-like mats, a groomer can help you remove them. If left unattended, matting can result in skin infections for your pup.

For best results, plan to bath and trim your puppy once a month. 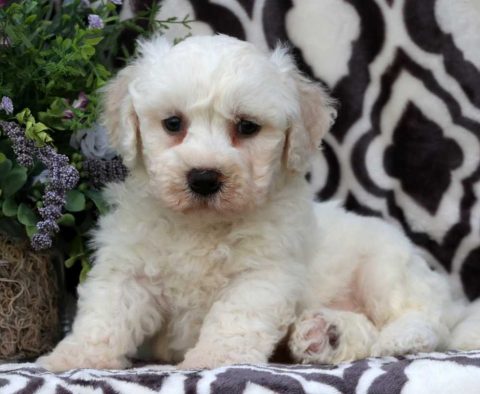