Looking for an Irish Setter puppy for sale? Setters have been recorded in Ireland since the 1700’s. It is believed that today’s Irish Setters are direct descendants from crossing Irish Water Spaniels, Pointers, Gordon Setters, and other Spaniels. Irish and European records show both white and red Setters were common variations through the 1800’s. However, in the late 1800’s, red specimens were preferred among some breeders and began winning big competitions. The preference for red quickly overtook the white variations.

The breed became popular in America as a hunting and gun dog in the mid 1800’s. In the U.S., the red Setter has always been the favorite. This elegant, athletic dog is famed for a flowing coat and a frisky personality. So, it’s no wonder that the breed became one of the top family dogs in the mid 20th century, and still remains a top choice today.

This breed was first recognized by the AKC in 1878 and grouped as Sporting.

If you want to buy an Irish Setter puppy, it’s smart to do a little research first. The Irish Setter is merry, rollicking, and romping. These pups are often described as fun loving, energetic, affectionate, and gentle.

Like most hunting breeds, these dogs are energetic and athletic. This means they need lots of vigorous, outdoor exercise every day. They are a good choice for joggers or homes with big yards. Bored or restless Setters will dig, chew, and bark.

This is a good-natured, social breed that needs companionship. These dogs don’t like solitary time. However, because they are hunters, be sure to watch them around smaller animals.

Irish Setters are smart, loyal, and obedient, making them fairly easy to train. They are very good with children, but their rambunctious nature may be a problem for families with very small children. Make sure they are socialized early or they may be shy around strangers.

If you’re considering adopting an Irish Setter puppy, make sure you understand this breed’s special health considerations. This is a robust breed with an average life expectancy of 12-14 years.

Some health concerns to watch for in this breed are:

Irish Setters are susceptible to Bloat, so monitor their food and water intake and don’t exercise them right after eating.

Keeping your dog at an appropriate weight is one of the easiest ways to extend their life. With all dogs, stay current on vaccinations and shots, and schedule regular checkups with your veterinarian.

Their coat is medium in length, short on the head, and longer on the ears and legs. Their wavy or straight coat also has feathering on the chest, tail, and backs of their legs. 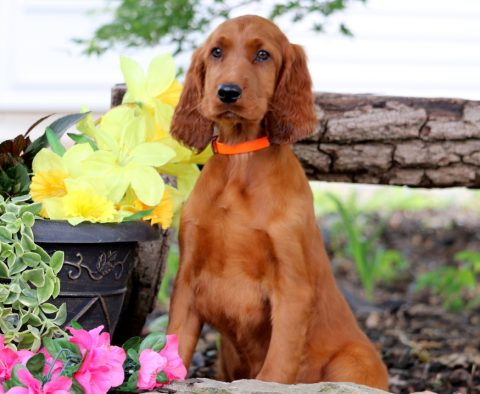 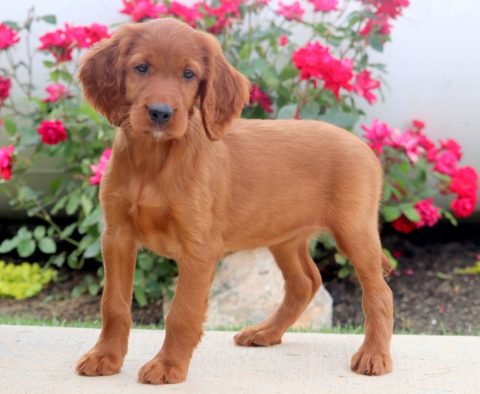