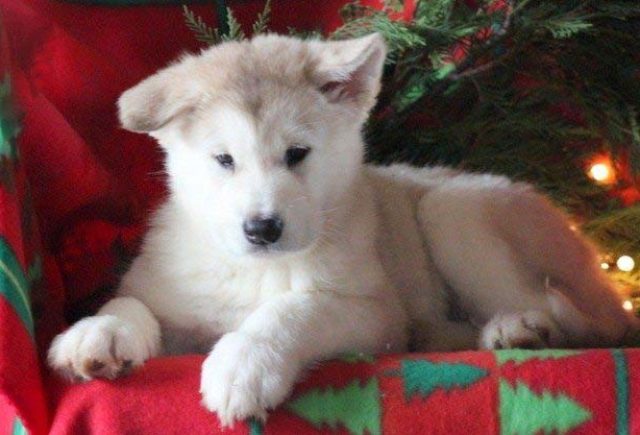 Looking for Alaskan Malamute puppies for sale? These iconic pups get their name from the native Alaskan tribe, the Mahlemuts. The Mahlemuts lived and worked closely with the hardy snow dogs for hundreds of years.

While this member of the Spitz group is widely recognized as the oldest North American breed, the Malamute is also closely related to snow breeds that are associated with parts of the world such as Chow Chows, Akitas, Finnish Spitz, and Samoyeds.

These hard-working dogs became famously prized as sled dogs during the Alaskan Gold Run in the 1890’s. During World War II, the U.S. military put them to work for the war effort, pulling sleds. Today these athletic, lovable canines are still used as working dogs in the North but are also beloved family pets in all climates.

This breed was first registered by the American Kennel Club in 1935 and was grouped as Working.

If you want to buy an Alaskan Malamute puppy, it’s smart to do a little research first. These dogs are intelligent and independent. They love outdoor exercise and make good “outdoor” dogs. This is a breed that needs lots of vigorous, outdoor exercise to stay calm and centered. When bored, they may howl, dig, or become destructive.

These intelligent animals crave mental stimulation. They are quick to learn and enjoy performing tasks and “working” for their family. They like to pull loads (and sleds!) as well as fetch and run.

They are good with children and usually patient of a little horseplay. However, they are exceedingly protective of their food. No child should get between a Malamute and his food.

Their intense hunting and guarding instincts can become problematic without early socialization and consistent training. Their enthusiastic urge to hunt may put cats or other small animals at risk.

These are cold-weather dogs that are comfortable living outdoors, but they don’t do well in the heat, so when the temperature climbs, restrict exercise to early mornings and after sundown, and make sure they have a cool, shaded spot for rest.

If you’re considering adopting an Alaskan Malamute puppy, make sure you understand their health considerations. The Malamute’s average life expectancy is between 11-14 years. They have a wide gene pool, which contributes to the vigor of the breed. Health issues are unusual, but some to watch for include:

Provide your dog with lots of outdoor exercise to keep him healthy, calm, and centered, but watch for heat exhaustion in warm weather. Keep current on shots and vaccinations, and schedule regular appointments with your dog’s veterinarian.

The Alaskan Malamute has a thick, waterproof double coat that sheds heavily throughout the year, so the coat will need daily brushing.

They shed twice a year heavily, or “blow” their coat, shedding large amounts of fur. The dog will require thorough brush-outs each day during this time.

Although some owners who live in warmer climates are tempted to shave the coat, this is not recommended. The double coat keeps the dog cooler, and shaved dogs are more susceptible to heat strokes.