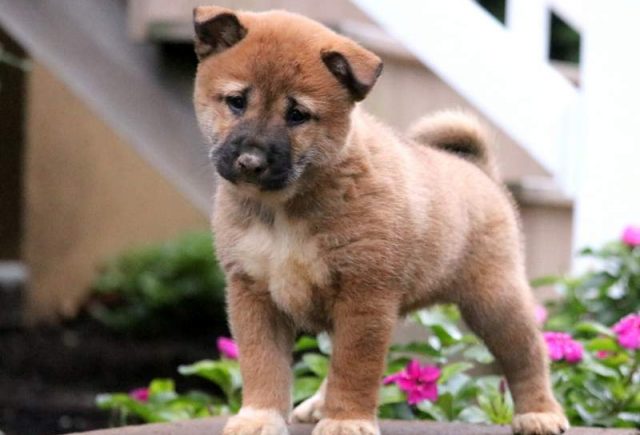 The Shina Inu puppy is an ancient Japanese breed, used as a hunting dog in central Japan as far back as 300 B.C. “Shiba Inu” translates to Branch Dog in Japanese. Some believe the name came from its similarity of the coat to the red brushwood trees in Japan. This compact, little dog was used as a hunting dog for smaller game. They were recognized as the official national dog of Japan, and the breed was declared a national treasure in 1936.

However this recognition did not stabilize the breed’s population. The number of Shiba Inus plummeted after the destruction in Japan caused by World War II. Their numbers fell further in the 1950’s after a distemper outbreak. To make the breed more vigorous, Japanese breeders worked to intermixed different regional strains.

This dog does not bark but instead produced a high-pitched scream. They are loyal to their family but aloof with strangers.

The first Shiba dogs entered the United States in the 1950s, but the breed only gained recognition by the American Kennel Club in 1993.

Shiba Inu puppies are very intelligent, affectionate, and independent. This spirited breed can be apprehensive of strangers or other animals and retains many of their hunting qualities. They will actively pursue small game and is sometimes aggressive to other pets and dogs. They are also known as wanderers and should be kept on a leash or in a securely fenced yard.

Independent and sometimes stubborn, this puppy will require experienced handling and training. For this reason, they are not always a good choice for a first dog.

A well-socialized Shiba Inu does well with older children who treat him well but will defend himself against tugging and grabbing, so he is not a good pet for younger children.

Before you buy a Shiba Inu puppy, make sure you understand this breed’s health requirements. Their average lifespan is between 12 – 16 years. They are a relatively healthy breed but are sometimes prone to hip dysplasia in later years. Other concerns to watch for are:

Give your dog lots of vigorous exercise to keep him calm and centered. Make sure you take your puppy in for regular vet checkups. With all breeds, it’s important to stay current on all shots and vaccinations.

This dog is an exceptionally clean and odorless dog with a double coat. The undercoat is soft to the touch while the outer coat is straight and harsh.

They “blow” their coat during shedding season, so the amount of fur shedding is substantial. It is suggested to take the dog outside to do a thorough brushing 3 – 5 times a week during shedding season is a must. At other times of the year, brushing your Shiba Inu 2-3 a month is sufficient. Only bathe when necessary, since bathing can remove natural oils in this breed’s waterproof coat.