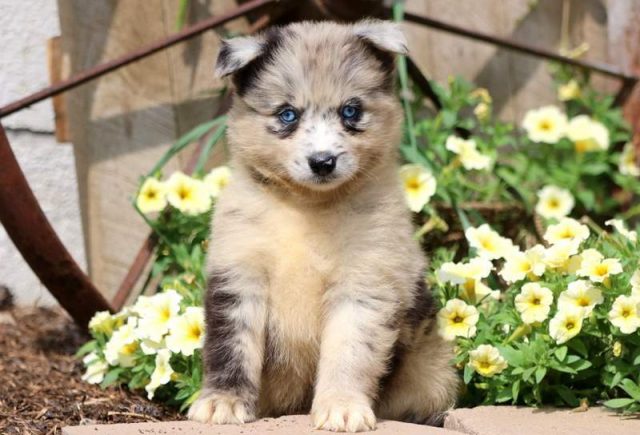 The Pomsky breed is a designer breed has a short but fascinating history. In fact, this may be the first internet breed ever. It was on social media that someone first posted a photo of mixed breed and invented the name Pomsky.

The image went viral, and soon millions of people were sharing a variety of real and doctored photos portraying their ideas of how a Pomeranian/Husky mix might look. The online frenzy, and the dream of a true Pomsky, became so popular that Arizona breeders teamed up to create the breed. By 2012, the first Pomskies were born, and the popularity of the breed exploded in the U.S.

The breed is recognized by the ACHC (American Canine Hybrid Club). This designer breed can also be registered through IDCR (International Designer Canine Registry) and ICA (International Canine Association, Inc).

If you want to buy a Pomsky puppy, it’s smart to do a little research first. The characters of Siberian Huskies and Pomeranians are similar. While every dog can be different, the temperament of the Pomsky as a breed is relatively stable. These dogs are energetic and playful.

They can be stubborn, so firm and consistent training is necessary. The old adage, “You can’t teach an old dog new tricks,” is often true with this designer breed. While they are trainable as pups, it is much more challenging to train (or retrain) an older dog. They respect leadership, so make sure your puppy knows who is in charge.

It’s important to walk or run with this energetic breed daily. A bored Pomsky can act out and become destructive.

This protective pup also makes an excellent watchdog. However, the shrill bark convinces many owners to train them to contain indoor barking.

Pomskies are not always a good choice for homes with children. They are often wary of children, and when intimidated, these pups can nip or bite.

If you’re considering adopting a Pomsky puppy, make sure you understand this breed’s special health considerations. The average lifespan is 13-15 years. All mixed breed dogs have a better chance of having fewer health concerns because of their genetic diversity. But because the breed is new, information about health concerns is somewhat limited.

This dog may inherit some of the health issues of the Pomeranian and the Siberian Husky. Here are some health concerns to watch for:

With every breed, stay current with shots and vaccines and schedule routine vet checkups.

The soft, fluffy coats can tangle or mat, so daily brushing is recommended.

Daily brushing will also help with shedding, especially in spring and fall. Because the coat regulates body temperature, trimming is discouraged. Bathe infrequently. Dog Breeds Similar to the Pomsky