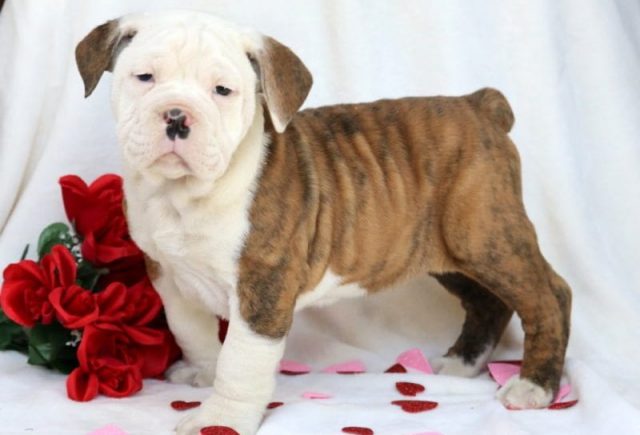 Looking for Olde English Bulldogge puppies for sale? These handsome pups are a new breed developed to recreate the extinct predecessor to modern Bulldog breeds. The result is a healthy, vigorous pup that combines the appearance of the 19th century Bulldog with a gentle, family-friendly demeanor.

This breed was developed in the 1970s by a Pennsylvania breeder determined to recreate the athleticism of Regency period Bull Baiters but without the fighting instincts. They were developed with crosses that consisted of English Bulldog, American Bulldog, Bull Mastiff, and other breeds. The resulting Bullie is a robust and muscular dog that is well proportioned. Unlike some bull breeds, Olde English Bulldogges do not suffer restricted breathing when exposed to cold or hot temperatures, are less likely to experience joint issues, and can breed through natural ties.

If you want to buy an Olde English Bulldogge puppy, it’s smart to do a little research first. While these dogs look like tough characters, they are sweet, gentle dogs. These loyal pets are eager to please and relatively easy to train. However, they need their humans to be kind but authoritative leaders.

They are sturdy, strong, and athletic, but prefer a slow and steady approach to exercise. Daily walks are required, but these pups are not runners. They also enjoy gentle horseplay and wrestling. Although they don’t have breathing problems in extreme temperatures, they’re still sensitive to extreme heat and cold, so these pups must be house dogs.

Bulldogges are very good with children, but they are innately jealous so they may have issues with cats or other dogs in the home. Early socialization and training will minimize their tendencies towards jealousy. While these pups are generally friendly with strangers outside of the house, they can get protective of home turf and their families. Socialization and training will be needed to curb this protective instinct.

They have strong jaws and love to gnaw, so provide these dogs with lots of sturdy chew toys like Kongs and other hard rubber toys. Keep stuffed toys, laundry, small household items, stuffed toys, and soft chew toys out of reach since these present health hazards to this breed.

If you’re considering adopting an Olde English Bulldogge puppy, make sure you understand this breed’s special health considerations. The average lifespan is 9-12 years. This breed was developed to be more robust than other Bullie breeds. However, it’s wise to monitor for some potential health issues, including:

Olde English Bulldogges are also prone to Bloat. Give them smaller meals and water to reduce this risk. Keeping them lean and moderately active will reduce the likelihood of Hip Displaysia.

All breeds should be kept up to date on shots and vaccinations. Schedule regular vet checkups.

Their coat is short, smooth, and slightly coarse.

They are moderate shedders. Brush 2-3 times a week to remove any dirt or dead hair. This is a breed that drools, so occasionally clean around the mouth and chin. Use a clean, damp cloth to wipe and then dry the folds in the skin to reduce odor and to prevent infections.