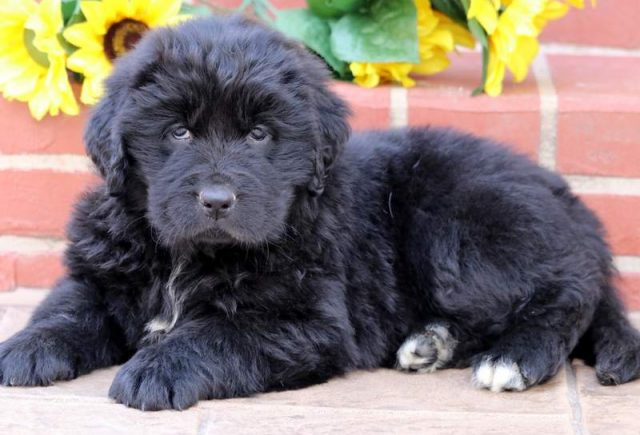 If you are looking for Newfoundland puppies for sale, you have chosen a dog with a long history. The Newfie has a long and somewhat uncertain history. These dogs most likely originated from a mix of fishing and hunting dogs brought to the island of Newfoundland, in Canada, by French and Portuguese fisherman and explorers starting as early as the 15th and 16th century. When talking about the origin of this dog, breeds such as the black St. Hubert’s Hound, the Great Pyrenees, the Tibetan Mastiff, the Viking’s Black Bear dog, and the St. John’s Water Dog are often mentioned.

This strong and hardy working dog is exceptionally athletic in the water. They have been used as a fishing dog to help haul in nets and to haul carts on land and are also used as water rescue dogs.

On land, these loyal giants have been used to protect farms and livestock. A Newfie was famously chosen as the companion dog for the Lewis and Clark expedition. These dogs were so popular in the 1800’s that they were chosen as pets for four 19th century presidents, Buchanan, Grant, Hayes, and Garfield.

This dog loves children and can be protective of them. Maybe that’s why “Nana,” the dog nanny in Peter Pan, was a Newfoundland.

The breed was recognized by the AKC in 1886 and grouped as Working.

If you want to adopt a Newfoundland puppy, you should start by understanding the breed’s temperament. This sweet giant is generally friendly, especially toward children. This affection can transform into protectiveness, especially for the smaller members of your family.

Although the Newfie is big and athletic, as he ages, his physical activity requirements become moderate. Give them plenty of outdoor exercise, or they may get bored and become destructive.

Bred as a water dog, this pup really loves swimming in pools, rivers, lakes, and oceans. His coat is well-suited to even the chilliest water, so he may crave a swim on even the coldest days.

Their thick coat means heat can be a problem for this Northern breed. Watch for overheating in the summer and keep him out of the hot sun.

If you’re looking for a Newfie puppy for sale, make sure you understand their health requirements. This large dog lives an average of 8-10 years. They can be droolers, especially in warmer months when they work to stay cool. Heat exhaustion and heat strokes are a real issue for this cold-weather breed, so make sure to keep them out of hot sun and direct heat and watch for signs of heat strokes in the summer months. Conversely, they love snow and ice, and will happily swim in icy waters.

Like many large breeds, the Newfoundland can experience joint issues later in life, but keeping your dog at a trim weight will minimize the risk of problems with joints. This breed also requires daily outdoor exercise and plenty of indoor space to stretch and roam.

Some health concerns that this breed may encounter are:

Take your dog in for regular vet checkups. With all breeds, it’s important to stay current on all shots and vaccinations.

They have a dense double coat which is very thick. The outer coat is long and straight or slightly wavy. They shed primarily in the spring and fall, but their coats mat easily all year long, so a thorough daily brushing is required.

A Newfoundland’s thick coat can also pick up twigs and burrs, so you may want to give him a brush out after every outing.

Don’t bathe them unless needed. Frequent bath may damage the natural oil in their coats. With this breed, make it a rule to give lots of brushing, but very few baths.

Dog Breeds Similar to the Newfoundland