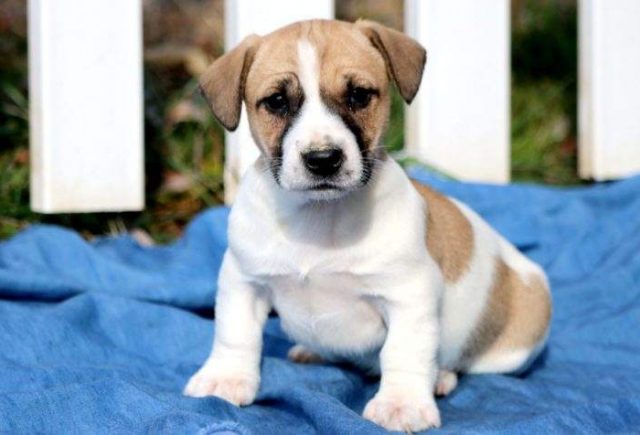 Jack Russell Terrier puppies are playful, spirited pup is an excellent choice for active families able to give their pets lots of exercise and attention.

The pup is named for the Reverend John Russell who developed the Terrier breed for English fox hunts the 1800’s. The breed remained a favorite hunting companion for decades and was a big part of many large, fox hunting parties. However, after World War II, few gentlemen kept large numbers of hunting dogs, and the Jack Russell’s population declined drastically.

Like many British breeds, this Terrier found new popularity in North America. The Jack Russell Terrier Club of America was formed in 1976, and the breed was later recognized by the AKC in 1998 and grouped as Terrier.

The Jack Russell breed is described as lively, alert, and keen. It’s a perky, intelligent dog that is alert to its surroundings and full of energy. They are also enthusiastic barkers.

These exceptionally agile and athletic pups jump high, cut quickly, and are famous for making mad dashes through their owners’ homes. This physicality makes them talented agility competitors.

These Terriers are loyal and loving to their family, but without thorough socialization and consistent training, these bouncy companions may channel their energy into aggression, especially towards other dogs. Regular exercise is vital to keep them calm and centered. Bored Jack Russell’s can become destructive.

If you’re considering adopting a Jack Russell Terrier puppy, make sure you understand this breed’s special health considerations. The average life expectancy is between 13-16 years. This is generally a robust and healthy breed, but some health issues to watch for include:

Keep all dogs current on vaccinations, and make sure to bring them in for regular vet checkups.

The Jack Russell coat can be smooth or rough. It can also have a combination of both which is known as a broken coat. A broken-coated dog may have longer hair on the tail or face than that which is seen on a smooth-coated dog. All coat types should be dense double coats.

They require little grooming, and trimming is discouraged. Brushing with a hard bristle brush 1-2 times per week should keep your pup’s coat in good shape. They rarely require baths.