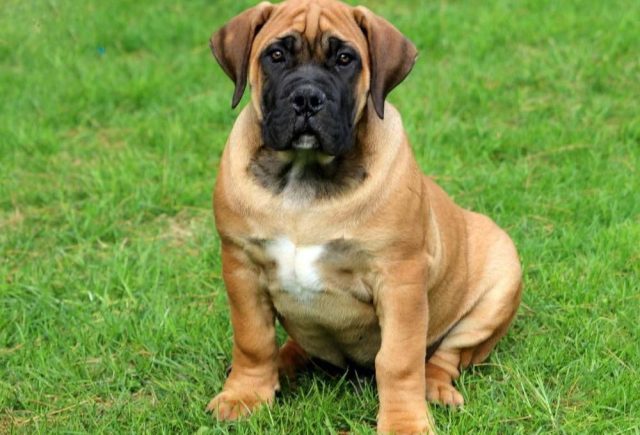 The South African Boerboel is a breed with a long but uncertain history. While records of this breed show up as early as 1652, its history is not well-documented. Originally a fierce guard dog for South African farmers, this large, athletic dog was a common pet in the region for hundreds of years.

While family photos in South Africa featured these dogs prominently for many decades, this large, protective dog remained a regional secret throughout much of the 20th century. In the 1980’s, researchers began tracking and recording the breed’s population in the region. Since then, the Boerboel has been declared an indigenous land race of South Africa and is now protected under a British Act of Parliament.

The breed did not exist in the United States until after the turn of this century. The Boerboel was recognized by the American Kennel Club in 2015 and categorized in the Working group.

Average Based on 8 Reviews

If you want to buy a South African Boerboel puppy, it’s smart to do a little research first. This breed is a robust and confident working dog and can be a loyal companion. They are affectionate and loving with their family and thrive on attention. However, these are territorial pups that can be aggressive if not socialized and trained correctly.

With a long history of guarding farms, they make good watchdogs. Importantly, they are not welcoming to strangers and may become fierce if they perceive their family is in danger. A confrontation from other dogs can also trigger their fighting instincts, so they don’t do well in dog parks. Owners should always use a leash when walking this breed. Overall, these canines require experienced trainers and handlers, and they are not recommended for first-time dog owners.

These over-sized pups need vigorous outdoor exercise every day to stay calm and centered. They can get their exercise in yards with sturdy fences but should never be left to roam.

If you’re considering adopting a South African Boerboel puppy, make sure you understand this breed’s special health considerations. The average life span is between 8-10 years. While this is an exceptionally robust breed, some health issues to monitor for include:

As with all breeds, keep your dog up-to-date on shots and vaccines, and take your pup to the vet regularly for checkups.

This dog’s coat is quite short and smooth.

This breed requires little grooming and maintenance. Brush occasionally with a hard bristle brush and bathe only when necessary.